DOW recovery during day shows it just can't drop much! Don't worry about STI or KLCI!

It is important that a trader develops a feel of the market. We need to sense how the market is. Today the performance of DOW Jones just shows me something. The market is still bullish, and can't drop much.

Not Even after a 399 points drop at the opening 2 hours. 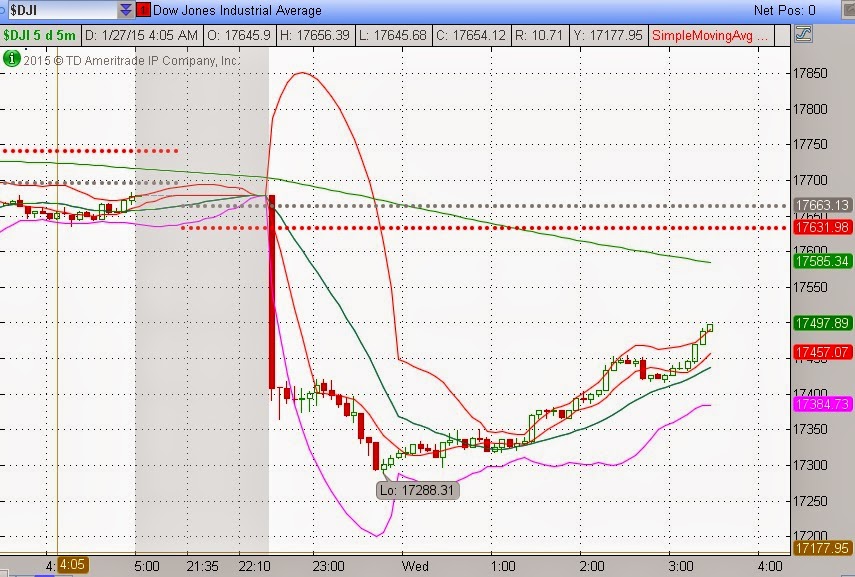 One way of sensing the sentiment of the market is to take note of what happen during the day when there is a big fall or what happen the next few days after a big day tumble.

Looking at the intraday chart, we can see that the DOW recovers half the points during the session. It is still 2 hours to the closing (3.15am local time now), but looking at this recovery, I have confidence that the bullish momentum is still alive.

The reason for this drop today is because of the bad earnings release from all 3 major companies, Microsoft, P&G and Caterpillar. But overall, I still think this earnings season so far isn't too bad afterall. Overall, 79% of companies have reported actual EPS above estimate The percentage of companies reporting EPS above the mean EPS estimate is above both the 1-year (74%) average and the 5-year (73%) average. Let us see what happen to Apple and Facebook earnings these 2 days...

Again I would like to emphasize that DOW has a major support at 17000!

Do not be worried about STI or KLCI now. The bullish momentum is still strong! STI is now above 3400 and KLCI has zoomed past 1800! I believe they still have legs to run! Today opening may see weaker price, but it won't be for long!

Time to focus a bit on local stocks! There are so many stocks that shows big players are now coming in to scoop up the stocks. Do not waste this opportunity to accumulate them!

In my blog, www.danielloh.com , I did touch on some of the Singapore and Malaysia momentum stocks to watch out for! Take a look.

A malaysia momentum stock that is run resting, but capable of further heights!

Malaysia stock market is going crazy after the recent sharp drop. Take note of some malaysian stocks. Ecowld (8206) is one of them.

Looking at the chart, we spotted accumulation in this stock too. Take a look at it...

This is one stock that I like fundamentally. Recently we spotted players are accumulating this stock.

<< STI is raging to 3400, what are the stocks that released good earnings in january? >>

You shall learn:
1) Stocks that should be in your watchlist
2) How do you know stocks has a good earnings?
3) Will STI continue its forward surge?
4) How can you make money consistently in 2015 from the market?

1) 2015 is poised to become a very volatile year in terms of the global economy as well as markets. In your opinion, what are the possible dangers that investors should keep note of.

2015 is a difficult year to play stocks. If investors are not careful in selecting the right markets to play, one might be hurt. The main reason for the uncertainty is the rise of the interest rate. We have already seen what happened in the last few months. It all started last year july when the US dollar goes into a bull market, ending 13 years of bear market.

Uncertainty of the interest rate has caused investors to park their money inside US dollar. And this has caused a lot of turmoil and volatility in some markets.

Firstly, the Crude Oil price crash as a result of the rise of US dollar. Some may say it is OPEC decision that caused crude to crash. But US dollar does play a significant role too. Then there was a collapse in some currencies such as Euro, Aussie, Yen or some emerging market currencies like Ringgit. The latest episode is of course the spike of the Swiss Franc. Bond Prices also shot up recently.

If retail investors are not careful in selecting the right market to play, they may suffer from hugh losses as volatility in some of these markets are high.
Question 2:

Since you will be talking about crude oil in your address, could you share your thoughts about the price of precious metals?
Daniel's Answer:

Precious metals surprising has stabilised after the Japanese government announced the second time that it printed money. Gold touched a bottom of $1130 before the rebound. I do think that precious does look like a good investment before the rise of interest rate.

It is once again a safe haven just before the uncertainty of the FED interest rate decision. That is the reason you see the Gold and Silver are rebounding these few days. I do think there is a chance of higher prices in the mid term.
Question 3:

What do you think are the common mistakes that investors and traders make when executing a trade?

The most common mistake is most investors do not know the duration they want to hold. When investing, we can day trade, position trade told for 1-2 months or we can buy stocks and hold long term for a few years.

When most investors buy stocks, they normally do not have an idea how long they intend to hold on to their positions. Only when we are clear about the duration, then we find the methods to suit the time frame.

They even average down to buy more positions when price goes cheaper. We can't say they are wrong. They are long term investors who can hold a position for 20 years. However for day traders, not putting a stop loss would be unimaginable.

The most important thing for investors is to know what time frame suits them.
Posted by DL Investment at January 25, 2015

<< How do you buy China A-shares? What are the sectors and stocks to watch out for? >>
如何买上海A-股? 中国有哪些领域和股票可以留意？

Plus we will be providing analysis on your stocks!

What is the matter with DOW?! Where is the support?

Today the market looks bad. A 300 points drop during mid day in the DOW Jones. Today's drop, I would say, is due to 2 factors.

1) The bad retail sales report that was released today. The actual result of -0.9% is too surprising compared to the expected 0.2%.

This result is horrendous considering it is the worst retail sales report since mid 2010. And this result comes on the heels of a supposedly "good" december holiday period seems all the more surprising!

And that explains the big drop today. This drop is a follow through of the poor ISM manufacturing report that came out on 2nd Jan. In Jan, DOW has already dropped around 700 points.

2) The second reason DOW has dropped is because of the poor results recently issued by one of the well known financial bank JP Morgan. Bad earnings miss: $1.19 actual EPS vs $1.30 estimates.

Please check the article below to know its earnings miss:
http://seekingalpha.com/article/2820236-jp-morgan-chase-is-down-4-percent-disaster-or-opportunity

Wallstreet are taking the opportunity to sell as they expects the same results from other financial banks that will issue earnings in the next few days.

However I would suggest let us wait for the other banks results first. It might not be that bad. The reason why JP Morgan results is poor because they report a  in legal expenses, or on a pretax basis, which was higher than many analysts had forecast.

J.P. Morgan is being investigated by the over alleged foreign-exchange rigging and is expected to strike a deal on the matter.

However I would suggest the other banks might not be having such a poor results as they dont have legal issues. I remembered that last year Bank of America also faced a similar situation when they lost quite a lot in legal fees. Their share price also tanked. But in the end it came back.


To summarise, I would say don't worry too much yet until we see more data on the earnings season. One JP Morgan does not meant anything.

Furthermore, I think DOW still has a strong support at 17000! 300 points away from now! Don't fret just yet! It is a chance to buy stocks cheap, not sell!

Daniel Loh has correctly predicted the revival of China Shanghai composite when it broke 2500 on TV and radio last year!!!


Learn what index Daniel Loh is looking at next that might revive exactly just like Shanghai Composite.

Join the seminar to find out how he does it!


I am asked to comment live in studio with another analyst to give our views on the views of 2015, the Crude Oil situation, the STI and challenges at 6.45pm today

If you want to know more about the market direction, tune in to your television, Channel 8.

<< With earnings coming up, what are the Strong Stocks you can look for in January? >>
业绩报告季节在1月将来了，有那一些强股您能看的?
sharing by Andy Yew

Will we have good employment figures to stop the DOW drop?

This drop is contributed by 2 factors.

1) Crude oil continues to go lower and lower and this has affected the DOW.

Speculators continue to push the price of crude down. Asian, European and American futures traders take their turns to push down the price one after the other.

It has got to do with the abundance of money in the market. With different countries printing money, this easy money has trickled down into the hands of big speculators and institutions who don't really care about the economy. One word - GREED!

Having said that, I do think that DOW will slowly detached itself from the influence of crude price as we grow accustomed to the fall of crude.


2) The second factor that affected the drop is the economical report that came out last friday. ISM, institute for supply management has a figure that is below the forecast. Its actual figure is 55.5 versus 57.6 forecast figure. It is a total surprise considering that last month we are still in the midst of the holiday season.

With another important jobs reports that is going to come out this friday, the non-farm payroll report, traders take the chance to profit take. And I think this uncertainty about friday figures pushes the DOW down.

However having said that, our research shows that this jobs report figure on friday may have a good chance of beating the forecast. And there may be a rebound should it beat. In fact today we should already get a glimpse of how the jobs are. There will be a ADP employment report that is a precursor to friday non farm report. I wont be surprise that there may be a rebound if the figures are good!


My trading advice is to stay at the sideline for now until friday non-farm payroll report. 2 scenarios might occur:

a) Report is above expectations: May consider buying some oversold and good stocks.

b) Report is below expectations: DOW may still drop, my opinion is wait for DOW to touch 17000 and below before accumulating the stocks. Below 17000 is what we consider as cheap.