S&P500 continue to hit new intraday high at 2100 yesterday! This is as bullish as it can get!

We are right that US market - S&P500 will hit new high before April. DOW is back above 18000 and a few points off its high. No doubt that it is going to hit all time high again.

Do remember that we continuously think the market might be in a bullish till April. Enjoy this ride! Any small drop is pick up time. 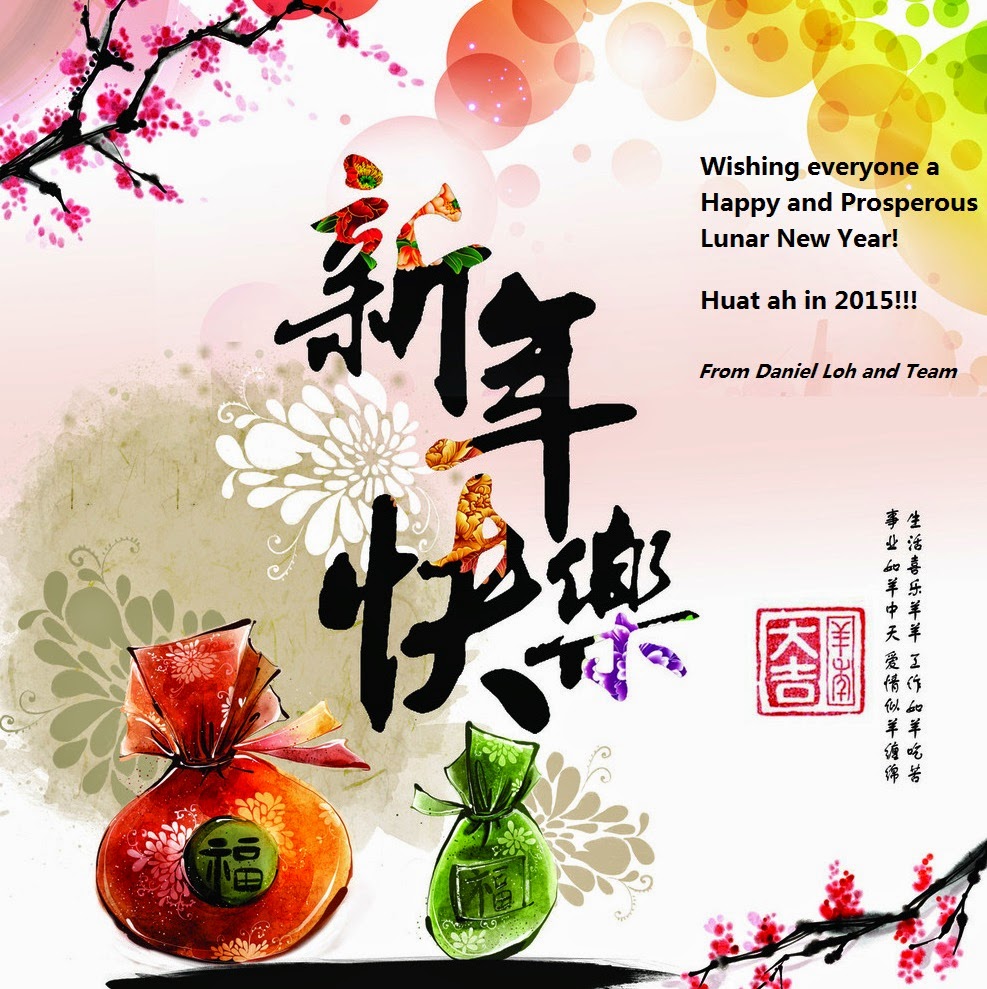 We would like to wish all our friends and graduates a Happy Chinese New Year! We continuously think that 2015 is a GOATY GOOD BULLISH YEAR!

Remember to save some money to get into the market whenever it is oversold!

Daniel Loh, the "Fengshui expert" thinks that 2015 is a year not to be missed! It is raining QE Hongbao everywhere!

By Daniel Loh  <Last seminar before a long CNY break!>

You shall learn:
1) Stocks that should be in your watchlist to take advantage of any oil bottom!
2) The World market and its opportunities!
3) Is there any reason for the rise of interest rate? What would happen if it rise or not rise?
4) How can you make money consistently in 2015 from the market?

This is the reason why DOW can't drop much before April

Why? Because Daniel Loh will not only buy one, but a few versions with different straps!

Apple recently declared a good earnings beat. At the same time, Apple CEO Tim Cooks announced that they are ready to ship out the i-watch in April.


Apple has been on the rise, from $109 before earnings to $120 now. We believe that with the expectations of the launch in April, this stock definitely has room to run.

In fact, in September when critics mentioned about the bent i-phone, we assured all to buy at the dip, this is a great chance to pick the stock up before the launch. Our target is set at $130 before the launch.

This is the article titled <Market drop because of Bent Apple Iphone rumor is a Joke!>:
http://www.danielloh.com/2014/09/market-drop-because-of-bent-apple.html

Our target prediction when I write to our graduates about Apple before the product launch:

The excitement of Apple would, in my opinion sustain the run of US market. This is what I term as the Apple phenomenon.

Any drop in the stock market might be a chance to buy rather than sell before the April launch.

Warren Buffet may be right that interest rate might not rise this year!!!

I saw an article in marketwatch.com that says that Warren Buffet thinks interest rate might not rise this year.

In this article he mentions a few things which I think is right. Summary below:

1) The whole world is now in the state of having loose monetary policy ie. printing money.

Japan has printed its QE2 last december after it drop into recession. My point of view is with Mr Abe re-elected, there is always a chance of another QE3 in the future.

China has printed money quietly last june through what they called a mini stimulus programme.
http://www.wsj.com/articles/SB10001424052702303847804579477060004679726.
To date, it is still a mystery as to how much money the government actually printed! I couldn't find a single article that points to the government announcing the printing of money. But it is of course a known fact among institutions that funds is injected that caused China stock market to turn from bear to bull.

The last major economy, Europe announced through ECB cheif Mario Draghi that Europe will print money continuously every single month until next year september. HEY! Doesn't that sound like US QE3 whereby they printed money continuously to fuel the stock market! It works for US, and Europe is now copying it!

The result is 3 of the 4 largest economy are still printing!

2) With everybody printing money and US doesn't, it is only right that US dollar is the only currency that is appreciating like crazy. Ha, no wonder USD came out of its 13 years slump and went on a bull run last july.

3) It would be crazy or unthinkable for Janet Yellen to increase interest rate as that will only fuels the rise of US dollar which will cause exports to tumble and lose whatever tinge of competitiveness it has (ha, i really wonder how much more..).

But anyway Warren Buffet does have a point. If inflation and housing prices are controlled, why would US be so stupid to kick its own economical legs! There would be a nail in the head after 3 wonderful QEs that saved US!


After reading this article, I realised that it might be true that interest rate does have no reason to rise this summer, which is the tentative date that most FED members have indicate and set these few months. And no doubt they will be listening to Warren Buffet and Jack Welch words, and those influential entrepreneurs before doing something drastic.

And if all this come true, there is only one result. 2015 will still be a bullish year! DOW 20000 might not be so far afterall!

Why should you be worried when Warren Doesn't?

Heck, just buy! Waren Buffet gives me more confidence that the market might be running and can't drop much at least until April, the month where Apple i-watch is sold in the market.

To date, I believe the hype and product launch excitement might cause the market to sustain itself.

Any small drop will be a buying chance!

1) With blue chip slowing and 2nd tier stocks running, what are the singapore stocks to watch out for
2) China Stocks that are suitable for investing
3) Market view of china and singapore

Plus we will be providing analysis on your stocks!

A few days back, we posted an article titled,


"DOW recovery during day shows it just can't drop much! Don't worry about STI or KLCI!"

In that article, we stated our view of DOW Jones. We said that it can't drop much, and most likely it will have a strong support at 17000.

In yesterday session, it drops to 17037 before it rebounds.

Check out the chart of DOW yesterday and today:

With Apple i-watch sales coming up in April, we seriously think that DOW may not drop much. There is quite some excitement in the market still. Unless Janet Yellen drop a bomb on the market by announcing an interest rate rise soon.

If indeed Crude rebound these few days, there is a good chance you might see an all time high price again before April.

<< What are the 3 fundamental strong Singapore stocks you should watch out for in FY2015? >>

You shall learn:
1) 3 Fundamental strong Stocks that should be in your watchlist
2) How do you know a stock is fundamentally strong?
3) When exactly is the oil price bottoming?
4) How can you make money consistently in 2015 from the market?