Do look at our attachment below for the data figures: 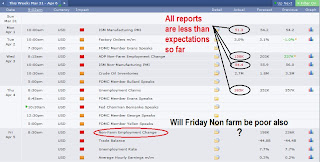 Having said that, the stakes for tonight's Non farm payroll has never been higher. The economic reports' stellar performance in the first quarter may be dented by a less than expectations results, proving that the recent economical reports may be due to a temporary QE3 boost and a seasonally good first quarter performance. Second quarter may be tougher than the first.

Seasonally there is always a truth to the "Sell in May and Go Away" concept as enterprises cut down on production going into the summer holidays. Normally, the effect of the good earnings reports that were released in the 4th quarter in January gradually diminished going into the 2nd quarter.

US companies' earnings results will start to be released on Monday, 8th April starting with the first DOW company Alcoa.

All eyes are fixed on Friday's non-farm payroll. If  non-farm turns out well, this bull run may have a chance of continuation. If not, we might start to see a few bears coming out of their hideouts.