Singapore Banks have not broken their resistances

Do you remembered our last article on 11 Dec: All 3 singapore banks hit a major roadblock?
http://www.danielloh.com/2012/12/singapore-stock-tip-all-3-singapore.html

At that time, we encouraged you to use the banks as a hedging tool against your bullish positions going into the year end meaning short them. Till now, the 3 major banks have yet to break out of their major resistances.

You probably can see them struggling. Today, UOB even cause a panic when at 12pm, it drop to $19.18 from $19.70 in a few minutes. I think this is caused by high frequency trading. But later on, it came back in the next few minutes. 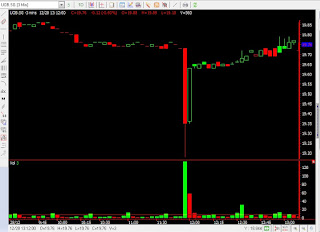 Conspiracy theory tells me a group of traders purposely attack this stock given the big surge in volume. Stop losses are taken out before market makers took over to push back the price.

Here I would like to remind you that such attacks normally occur during lunch breaks just like the flash crash attack that happened to Dow Jones a couple of years back where in 20 minutes DOW drop by 1000 points. It happened on lunch time also.

Consider shorting the banks still to hedge your longing positions...