Market back on top gear after a fight! Are you in?

Glad to be back form my holidays! During my seven days off, the Dow has climbed 6 out of 6 sessions. Let me do a bit of recap...

Do you remember that 3 weeks back, a lot of the folks are still worried of the fiscal cliff incident? People are still worried that the economy next year is falling down the cliff, and even some in Wallstreet are very sure that the republicans and democrats can't solve it in time.

Looking back, don't you think that this is a great opportunity missed? While people are lamenting and doubtful about the market, we have made quite some money from the market.

Lesson learnt here is not to trust the media. Learn how to study the market sentiment and confidence.

A recap of this month's written articles to show there is faith in this market...

On 26th november, we mentioned that the retail spending is up with the best post thanksgiving shopping - Black Friday ever. It indicates bullish sentiment among americans. Do they care what cliff or mountain there is? And I believe that next earnings season in january will be a blockbuster, and I continue to believe so. Watch out for tech and internet sector! Watch out for Apple earnings this time! A potential to FLY!

On 28th november, we did say that dow is waiting to break 13000 in gangnam style, meaning dancing around before breaking the resistance and also the 200day MA mark. We assured that just by studying the daily movement in the index, you will know whether market is positive and optimistic or not. How it close is one way of knowing it! 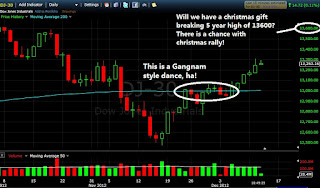 3) <<Controversy is what makes the market - 30th november>>
http://www.danielloh.com/2012/11/controversy-is-what-makes-market-will.html

On the 30th november, we wrote an article about the fiscal cliff controversy, reminding all not to guess too much into whether there be a cliff or not. Just focus on the expectation of Wallstreet and your strategy. Controversy always happen in the market. It is how we study the market confidence and sentiment that matters. Don't be a politician or media! Be a trader!

Having said that, I would like to share something that perhaps nobody has yet to comment. Do not think that if the fiscal cliff policy is out, stock market will continue to burst forward! Don't fall into the media hands again!

If this stock market continues to burst forward, when expectation has already been factored into the market, whether got policy or not, it is bound to consolidate. Do not be a FOOL to rush into the market then just like the QE3! Buy on expectation and sell on news should be our game!

You are just playing into the hands of the pros who are always one step ahead of you if you are slow in the game. If you would like to make some money. start now.