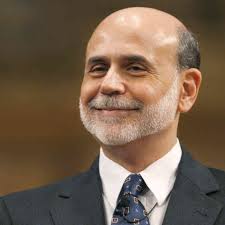 Tribute to my American idol, Mr Ben Shalom Bernanke! No joke, I think this guy is one of the greatest ever FED chairman ever, a master of market psychology. Those who have studied our blog should have known that as we mentioned repeatedly.

This is the last article we mentioned Big Ben:
http://www.danielloh.com/2013/05/will-ben-bernanke-and-fed-family-push.html

Wallstreet certainly love this guy judging by yesterday's reactions. To me, with him around, US stock market 4 years bullish run will likely continue. With his decision of QE1 and the Banks stress test (which I think is a ploy he employ to gain market confidence) policy, he brings the 2nd greatest recession since 1929 to an end in march 2009. To me Stress Test is a stupid insider exam to fool the world where 100% of the banks actually pass the test?? Comeon.. But this gimmick by clever Ben did the trick.

One year later when US is still suffering from the high unemployment rate and the still fragile economic figures, he actually pulled a QE2 trick out to prevent the stock market from having a double dio recession! No joke, I think without this QE2 at that time, I feel that the stock market would have crashed like the Great Depression after a one year rally. It did not happen, and confidence is back in the market.

He will be remembered the only Fed chairman to bring Dow to an all time high with unemployment rate still above 7%. No one has done it before. With such a high figure, he pulled off the trick again, manipulating the market to all time high. Wallstreet is given an injection of steroid. Everytime he appears, the market rejoices.

He will not be a good economical man, but he is a Wallstreet hero!

But alas, news has it that he will be replaced soon by other candidates. I fear for the market after he is gone. He will be remembered as the greatest stock market manipulator, a Warren Buffet fan too.

An article that says about Bernanke being Buffet's fan
http://www.housingwire.com/fastnews/2013/05/06/warren-buffett-fan-bernanke-mbs-purchases

Bye bye Big Ben, you are my hero!