Will we have a Recession with the poor ISM report?

U.S. stocks fell Monday after data showing that American manufacturing activity dropped into contraction territory in June for the first time in three years. A lower than 50% figure is often termed as contraction and sometimes it is a precursor to a recession.

But having said that, funnily, DOW seems to come back a bit in noon. Now it is just 40 points in the red while S&P 500 and Nasdaq turns green!

I saw an article in marketwatch screaming RECESSION may be coming. Oh what an eye catching headline! 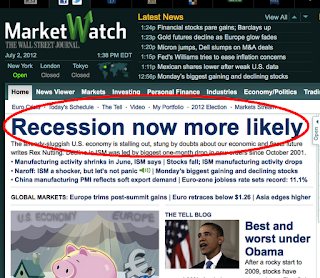 I think this is probably the effect of QE3 in the working again, or the "expectation" of it in the working. Now it seems that the more disastrous the reports are, the more market thinks there is a possibility of FED announcing QE3, meaning printing money again.

And we have the next FOMC meeting end of July on 31 July where Ben Bernanke will speak.

After this month, ISM would probably pick up. So don't worry about recession for now.


But having said that, we still need to be careful this Friday!


IF employment reports are still bad, I can said, the positive mood may change to negative. Remember last month's jobs report? My advice is to profit take and go light in positions going into Friday.

If employment reports are not good, wait for the selldown to occur and subside before entering as expectations of QE3 will kick in again.

If employment reports are good, that this is the best chance to go bullish till end of the month, where anticipation of QE3 will drive the stock market up!