It is indeed a terrible terrible day in the world of pennies! A stock like Blumont priced at $1.90 can drop to $0.88 before being suspended. Asiasons drop from $2.65 to $1.04. After the trio Blumont, Asiasons and Liongold were suspended, it affected pennies like innopac and ipco, which brought down the whole penny market. Innopac and Ipco has long been rumored online that they are related to the trio. How true are they???

The trio was suspended as the company prices fall by half in one morning session! They were queried by SGX on the trading activities.

But at around 4pm, Asiasons did issue a statement to clarify its activities. 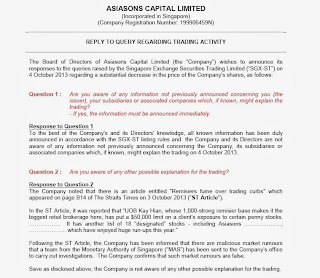 
Asiasons Capital Limited noted that there is an article entitled "Remisiers fume over trading curbs" which appeared on page B14 of The Straits Times on 3 October 2013. In the ST Article, it was reported that "UOB Kay Hian, whose 1,000-strong remisier base makes it the biggest retail brokerage here, has put a $50,000 limit on a client's exposure to certain penny stocks. It has another list of 18 "designated" stocks, including Asiasons, which have enjoyed huge run-ups this year." Following the ST Article, the Company has been informed that there are malicious market rumours that a team from the Monetary Authority of Singapore has been sent to the Company's office to carry out investigations. The Company confirms that such market rumours are false...

The ironic thing is today, Blumont and Liongold both issued good news that they want to acquire businesses!

Blumont: Takeover Bid For And Investment In Coal Mining Company For S$145.9 Million.

Blumont Group Ltd. has, on 4 October 2013, reached agreement on the commercial terms of a proposed takeover bid for all the fully paid ordinary shares of a foreign-listed coal mining company for an aggregate consideration of up to approximately S$145.9 million . The Consideration is to be satisfied by way of an allotment and issue of up to approximately 72.2 million new ordinary shares in the capital of the Company, at an issue price of S$2.02 for each Consideration Share...

LionGold Corp Ltd is currently at an advanced stage of negotiations with a company listed on three foreign stock exchanges to acquire a stake in the Target. The Acquisition will be by way of cash in two tranches and will be subject to, inter alia, the regulatory approvals of the relevant foreign stock exchanges. The Target, together with its subsidiaries, is a gold mining, development and exploration company. The Target has a producing gold mine as well as gold mines under development. No formal agreement has been executed in connection with the Acquisition yet. In view of the suspension, the Target is considering whether the Acquisition should proceed. The Target was introduced to the Company by Jennings Capital Inc., a Canada based capital markets oriented investment dealer...

Normally Liongold and Blumont stocks climb whenever it announces some acquisitions! This is supposed to be a good news by its normal nature!
I am sure the companies are also shocked by this drop today!

Now I think the public would like to hear something from the company! Let us see if the so-called rumors about the trading limit set on Asiasons or other companies are right. If it is wrong as said by the company, then perhaps this stock might see the mother of all bounce back.

There are so many mysteries to these stocks now. Rumors and Stories are plentiful. So who is right and who is wrong? Are the companies genuinely trying to expand its business?

As retailers, we just have to wait and see what the responses are these few days...

(All news sources are from shareinvestor.com)
Posted by DL Investment at October 04, 2013