As I wrote in the weekly article, 2moro is the main event for this week. This week, the market has been totally immersed with Spain's Bonds. DOW rallied 200 points on Tuesday because the sale of 12 - 18 months bonds were better than expected. 2moro will be longer term 10 year bonds which are considered more important!!

Today DOW drops 80 points again because of Spain because of increasing bad debt ratio by Spanish banks. So I expect 2moro bond auction to be the mega event of the week. If anything is less than expected, expect market to fall and vice versa.

The thing is issuing bonds are the only way Government can finance their debts. If nobody buys, then Government will default on payment of old bonds or debts, which may lead to further downgrades on their bonds. When that happens, more don't want to buy them. This is a vicious cycle like what Greece goes through.

They are defaulting on their debts. Nobody wants Greece bonds now. 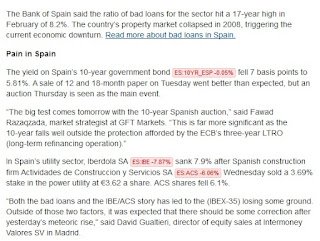